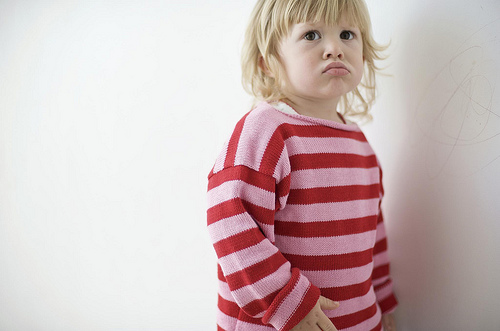 When you notice that your child is short tempered, stubborn, is resistant to instructions or finds it difficult to make friends, what do you usually think of the situation?

Most of you think of it as a behavior problem, and this is a natural line of thought. You infer that the child needs better disciplining and stricter parenting, perhaps. Then, you try to resolve the problem using this understanding. You are firm with the child, try not to give in to his demands and try to encourage him at regular intervals to learn healthy behaviors.

Haven’t you noticed that sometimes, even if you follow all these techniques, the child’s behavior does not change? Or, that it gets worse?

In practice, we see this happening with several children. Their behaviors become more severe with time, until parents start to give up hope.

What Really is Going Wrong?

Your understanding of the child and the situation is not wrong, only it is possibly incomplete.

What’s amiss in this approach?

Well, there are parts of the problem that are obvious in the child’s behavior. But, these are parts; or as we say, symptoms. The roots of the problem are often not obvious in the child’s behavior. Remember, the child’s understanding of the world and communication ability are still developing. Children will not be able to identify and communicate what really is happening to them internally. So, one would be mistaken if one equates what the child does with what he or she is, internally. The roots of any problem are always deeper than just the symptoms. To help the child, it is crucial to keep this in mind and to understand what these roots are.

The following paragraphs should make it easier for you to understand low self esteem more holistically, so that you can then understand your child better.

What Is Low Self Esteem The Way We Know It?

When you think of a child having low self esteem, what image spontaneously comes to your mind? That of a quiet, shy child, who is sensitive, who cries easily perhaps and who is afraid of taking initiative.

These qualities again are not wrong or incorrect. But, they are not the only indicators of low self esteem.

What truly is Low Self Esteem?

Low self esteem in its essence means that one is not comfortable with himself, as he is – he is not happy being who he is.

I want you to imagine being in such an emotional state – if you are not internally comfortable being who you are, what would that do to the way you see yourself, and the world around you?

Do you think you would have been easily provoked? Pessimistic and thinking of the negative? Would little things have made you upset? – because they didn’t go your way?

Even in imagination, you probably said ‘yes’ to most of these questions.

Think of a person you know who is constantly grouchy, irritable or demanding. Now look deeper within that person. What would you be likely to see at his very core? – Happiness and contentment? Or a sense of lack in what he is as a person?

The answer is clear. Low self esteem at a deeper level certainly leads to overt disturbances in behavior. You are now seeing the problem from its root, not just its surface.

What is the Connection between Behavior Problems and Low Self Esteem?

There are two ways in which behavior problems could be connected to low self esteem.

One is a direct connection. Because the child does not feel good about himself just as he is, he feels a sense of failure very easily. As an example, for other children, not getting a toy they want is mild disappointment. But for a child with low self esteem, it would seem like ‘failure’ – failure to get what he wanted. More than the toy, it is a feeling of success that he craves. He wants to change his inner feeling of failure. Hence, he devotes all his energy into getting the toy.

Ironically, this struggle of the child is totally invisible to anybody watching his behavior or interacting with him. As spectators, all you see is the stubborn, unrelenting child who is insistent on getting a toy. Hence, the root of the problem remains unaddressed.

The other connection between behavior problems and low self esteem is a more pervasive, indirect connection. If I were to feel low about myself, automatically, I would feel less happy, more anxious, more upset. I would easily feel uncomfortable in situations, be less willing to try out new things and feel easily threatened by changes in the environment. This feeling is not connected to any specific event or occasion. It is an internal feeling that stays pretty much throughout, like a layer or filter through which the child experiences life. Slowly, it shows in behavior as irritability, short-temperedness, crankiness etc.

What Can you do to Support your Child?

As a first step, try and understand your child for what he is. Be attentive to the child’s emotions rather than just his behavior. Try and put yourself in his shoes, unconditionally. Question yourselves about what the child is likely to be undergoing. Even if you do not immediately understand the answers, you would have begun thinking in the right direction. More ways of relating to your child will open up in your mind once you begin thinking this way. And empathy is often the foundation upon which everlasting, supportive and strong relationships are built.

See More to the Child than his Stubborn Behavior:-

Stubbornness and difficult behavior are distinctive; they stand out, especially since the child repeats such behavior. Slowly, one starts seeing the child as ‘a stubborn child’. Stubbornness and aggressiveness are not the only qualities that the child possesses. Yet, because you correct his stubborn behavior more often than other behaviors, slowly, the other qualities become relegated to the background. You might internally know about other good qualities that the child possesses. Yet, it is important to consciously remind yourself that the child is more than just a stubborn, irritable, angry person.

Give the Child Positive Feedback :-

Low self esteem makes children more prone to noticing negative things about themselves. To add to that, their behavioral problems ironically lead to them getting more negative feedback. Hence, it becomes all the more necessary for parents and close ones to provide positive feedback to the child. Such feedback needn’t always be for the child’s accomplishments or what he does, it could also be directed at what he is as a person. Feedback about the child’s intrinsic qualities such as kindness, affection, willingness to share, curiosity etc is a great way to raise the child’s belief in himself as a person. This is because such qualities are not affected by success and failure at particular tasks. A child could spoil a painting, or do badly in one test. However, his basic qualities as a person are far more stable, irrespective of outcomes on specific tasks.

Keep feedback simple and genuine. Do not exaggerate the child’s qualities just to make him feel good.

Children with low self esteem often tend to give up easily. They also have difficulty taking initiative since they wish to avoid a feeling of failure. It is important to reassure them that it is okay not to ‘get it right’ when they try. Explain to them that learning is a process which takes time. Encourage them to go ahead and try when they refuse to, or are hesitant. When they hesitate, show them how to do the task once and let them try it themselves. It is very important here to understand that they say ‘no’ for attempting tasks because they feel under confident; not because they want to disobey you.

Children with behavioral problems often resent rules because they get corrected often by parents and other elders. They see parents and teachers as rule setters and themselves as rule followers. This makes it seem like an unfair game, where they always have to follow what another person commands. It helps to tell children how adults also need to follow rules, and how adults also have to face consequences if they break these rules. Think of it and you have numerous examples available – at work, at public places, even at home. Again, take care to keep your examples realistic and genuine. Examples such as, ‘the bad man will carry me away if I break a rule’ help in managing the child at that moment, however, they either create fear in the child; or, the child realizes with time that no bad man seems to come! Share examples with them that are realistic, such as ‘having to pay money for breaking a traffic rule’, ‘having to face an angry boss for missing deadlines’ etc.

Be Very Careful of Language

To have low self esteem is hurtful and conflicting. If resolved in childhood, it can help avoid a whole lot of emotional problems in adulthood.

Understanding Aggressive Children : The Victim Behind the Aggressor

Telling it Right: Tips for Communication with Children

Nurturing Your Child’s Self Esteem

Do share what you think can be done to raise children’s self esteem through comments. If you know anyone who would benefit by reading this article, do share it with them.

About the Author: Malini Krishnan is part of the team of psychologists at Inner Space – A center for counseling and psychological assessment. Sadia Raval is the Founder & Chief Psychologist. You can know more about them here. You can follow them on Google+ , Facebook and twitter for regular updates of their work and share with them what you feel about this post.

14 thoughts on “Behavior Problems in Children – A Sign of Hidden Low Self Esteem?”